Andre Hill was approaching a Columbus police officer with his phone in hand when he was fatally shot.

Early Tuesday morning, Columbus police responded to a non-emergency disturbance call made by a neighbor on the 1000 block of Oberlin Drive on the city’s Northwest Side about a man sitting for an extended period of time in an SUV that was running off and on.

A short time later, the man, identified Wednesday as 47-year-old Andre Maurice Hill, was dead after being shot by a responding officer.

The shooting comes at the end of a year that has seen protests across the nation against racial injustice by law enforcement in response to several high-profile shooting incidents, including the deaths of George Floyd and Breonna Taylor.

It also comes less than three weeks after 23-year-old Casey Goodson Jr. was fatally shot Dec. 4 at his Northland area residence by Franklin County Sheriff’s SWAT deputy Jason Meade.  The Goodson investigation is being handled by Columbus police, the FBI, the U.S. Department of Justice Civil Rights Division and is being overseen by David DeVillers, U.S. Attorney for the Southern District of Ohio.

The investigation into the latest shooting early Tuesday is being handled by the Ohio Attorney General’s Bureau of Criminal Investigation (BCI) and is ongoing. Here is what is known so far:

Who was involved in the latest shooting?

On Wednesday morning, the officer was identified as Coy, 44 years old and a 19-year member of the division. Coy, who is white, has a history of complaints against him and was suspended in 2012 for 160 hours following an incident in which he pushed a driver’s head against the hood of a car four times during a traffic stop for drunk driving. The city paid the driver $45,000 in that instance.

Hill was identified as the victim by the city on Wednesday afternoon.

The city Department of Public Safety released a statement Tuesday afternoon about what was known from early investigation, including a review of bodycam footage.

Officers had been dispatched at 1:37 a.m. Tuesday on a non-emergency disturbance call about a man in a SUV that had been turned on and off multiple times over a period of time.

When officers arrived, according to the city’s statement, they found a garage door open at a home on the 1000 block of Oberlin Drive and a man inside the garage. The man, Hill, approached police with a cellphone in one hand and the other hand not visible.

That’s when one of the officers shot Hill, who was visiting there. He was rushed to OhioHealth Riverside Methodist Hospital, where he died.

Is there video of the shooting?

Yes. The officers who responded to the complaint were wearing body cameras. However, the city statement said the officers did not turn those cameras on until after the shooting had occurred.

Because of a feature on the cameras called a “look-back,” the shooting was captured by the cameras. However, the look-back feature does not capture audio recording, so there is no audio available of what was said between the man and the officers before the shooting.

The bodycam video will be released to the public after Hill’s family has reviewed it. He also said Ohio Attorney General Dave Yost requested a short delay in the release of the footage so that BCI agents can interview one of the officers who was at the scene.

There is no dash camera footage because it was a non-emergency call and the responding officers did not respond with lights and sirens on, which automatically activates the dash camera.

Has any other evidence been disclosed?

No weapon was recovered at the scene, the city statement said, which means the shooting victim was not armed.

The body camera footage also indicated there was a delay in rendering medical aid to Hill.

Additional information, such as forensic testing or autopsy results, will not be made available for weeks or months.

What will happen to the officer involved?

The officer was initially placed on administrative leave, in accordance with police policy. During a press conference that began at 2 p.m. Tuesday, Mayor Andrew Ginther said he had asked police Chief Thomas Quinlan to relieve the officer of duty, another term for suspension, and wanted the officer’s firearm and badge taken.

Late Tuesday afternoon, an update was issued to the city’s statement reporting that Quinlan had ordered the officer relieved of duty, requiring him to turn in his badge and gun, stripping him of all police powers pending the outcome of the criminal and subsequent internal investigation. The officer will be paid during this time while he is relieved of duty, in accordance with the union police contract.

The officer will eventually be interviewed by BCI agents. If he is cleared by both independent and internal investigations, the officer will have to be determined fit for duty by a psychologist before he could return to work at a later date.

How is the investigation being conducted?

In accordance with a policy put in place this past summer, BCI is leading the investigation into the shooting. Under the memorandum of understanding between the city and the attorney general’s office, BCI now handles the investigation of all shootings, both lethal and non-lethal, involving Columbus police.

Following the shooting of Goodson, which occurred within the city but did not involve Columbus police officers, Ginther said he has directed police to ask BCI to investigate all law-enforcement shootings that occur within the city of Columbus, regardless of the agency involved. Attorney General Dave Yost said he declined to allow BCI to investigate the Goodson case — even though the city was initially told by his office that they would take the case — because BCI agents were not the first agency called in to investigate from the start. 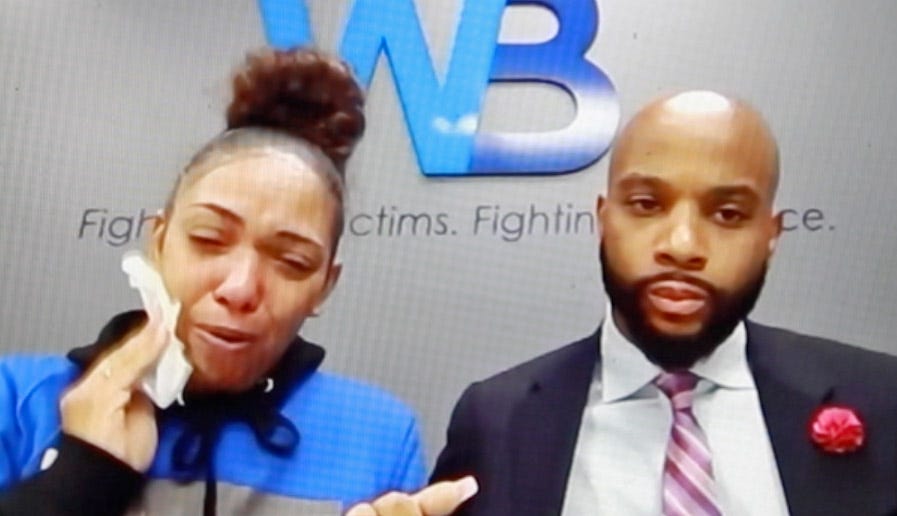 The mother of Casey Goodson Jr., Tamala Payne, describes how she was treated after her son was shot by a Franklin County Sheriff’s Deputy.

Ginther has also asked David DeVillers, the U.S. Attorney for the Southern District of Ohio whose office is overseeing the Goodson case, to review the latest shooting case to determine if the man’s civil rights were violated.

What will happen after the investigation is completed?

Former appeals court judge Gary Tyack, who was elected Franklin County prosecutor in November, will be in office when the investigation is completed and will make the decision on how to proceed.

The officer will also face an internal Columbus Division of Polic review of his actions and could face civil lawsuits.