Douglas M. McLeod and James Hertog define the protest paradigm as the “routinized” coverage of social protest by mass media. They argue that the images and stories told about protests in mass media emphasize protests as events—especially spectacular acts of violence—while masking the issues at the root of the protests. As a result, protestors are portrayed as “deviant.” Ultimately, McLeod and Hertog argue, mass media depictions of protests impact the “growth of radical movements” by delegitimizing the protest groups and their views, thus marginalizing them from dominant political discourse.

Moreover, McLeod suggests elsewhere, mainstream media deploys “news frames” that draw on specific aspects of a given protest to construct meaning and to provide a means for the general public to understand the protest. For example, referring to protests as “riots” or framing the coverage as a “crime story,” negatively influences public opinion.

Social movement research offers perspectives on news coverage that shed light on this framing process. In their ethnographic content analysis of over 750 television news reports, Malaena Taylor and Kate Gunby note that the academic literature on news coverage of protests tends to promote the idea that journalists “personalize the stories and emphasize individuals’ actions, hardships, and successes” as opposed to offering more in-depth coverage of the deeper political positions of social movements. However, Taylor and Gunby argue, “news coverage paints a complex and contested picture of the movements’ realities.” Looking at the relationship between TV news framing and in-depth reporting on activism with the Global Justice Movement (GJM) and the Tea Party Movement (TPM), they found that even in-depth reporting doesn’t always result in positive coverage for activists. In fact, news installments that were “less critical of activists” were also “less likely to provide in-depth coverage of their movements.” Interestingly, Taylor and Gunby found “very few” examples where the GJM was framed positively, yet nearly half of the TPM frames were positive. Their research suggests that news framing is informed by underlying partisan and market-driven motivations, since the anti-neoliberal platform of the GJM is linked to a more radical left politic, while the TPM is firmly rooted in right-wing, U.S. patriotism, and free-market nationalism. Mass media coverage of U.S. social movements that are racialized as non-White is even more complex, with underlying partisan motivations that reflect sociohistorical investments in White supremacy and patriarchy that negatively frame these protests in myriad ways.

Black Protest Frames Amidst the Reality of Black Violability

Mass media depictions of Black protest movements often rely on racialized and gendered stereotypes of Black bodies. Power is depicted as the physical and sometimes violent dominance at the hands of (presumably) cisgender, hypermasculine presenting men. This includes images of physical altercations between protestors and police officers.

Consider the following video posted on Twitter by Sherrilyn Ifill, President and Director-Counsel of the NAACP Legal Defense Fund. It shows a crowd of protesters in New York City using the “hands up don’t shoot” gesture popularized after the 2014 police shooting of Michael Brown in Ferguson, MO. The video depicts police officers demanding protestors to “step back” and one removes the mask of a young Black male and proceeds to pepper-spray him in the face.

This boy had his hands up when an NYPD ofcr pulled his mask down and pepper sprayed him. ⁦@NYPDShea⁩? Mayor ⁦@BilldeBlasio⁩? pic.twitter.com/YtXDOoVckA

Here the unequal power dynamic between protestors and law enforcement is illustrated by the strength in numbers of the former which is then outmatched by the strength in militaristic force of the latter, as representatives of authoritarian state power. Hypermasculine gender performance is privileged as a de facto form of masculinity that aligns acceptable behavior and physical presentations with gendered social norms of male dominance (both physical and structural vis-a-vis social institutions). This hierarchy of masculinity rests at the intersection of gender, race, and heteronormativity, whereby any threat to the existing social structure is met with extreme resistance. In the case of Black protest, the immediate threat—organized resistance to structural racism and race-based inequalities—is met with police force enacted upon Black bodies. There are many examples of this dynamic throughout the history of the United States.

An October 1906 cover of French daily newspaper Le Petit Journal, for instance, depicts a White mob choking, holding down, and violently overtaking Black male protesters during the Atlanta race riots of September 22-24, 1906. Newspapers of the time reported anywhere from 25 to 40 Blacks were killed, while only two Whites were killed.

Sixty years later, the 1965 “Bloody Sunday” attacks in Selma, Alabama became a watershed moment for the Civil Rights movement in America, in part because of how the protest was depicted in news media. State troopers advanced on over 600 protestors, led by John Lewis and Hosea Williams, with tear gas and billy clubs amidst the backdrop of a crowd of white spectators with Confederate flags, on a bridge named after former grand dragon of the Alabama Ku Klux Klan, Edmund Pettus. 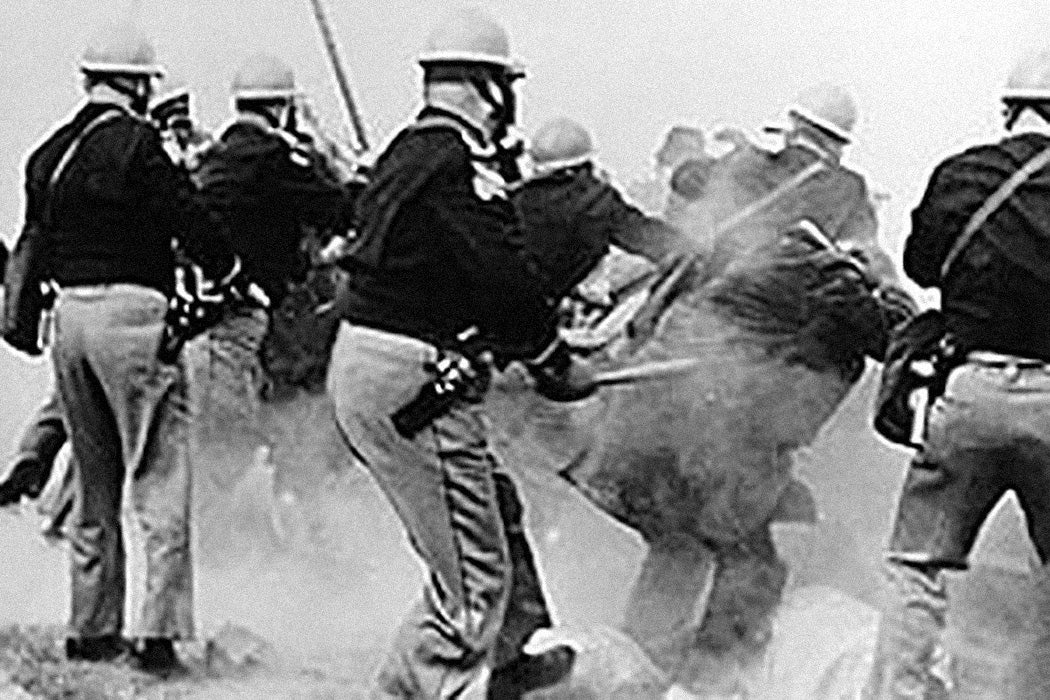 These images were displayed on television screens and newspaper covers across America, which spurred public opinion to support the enactment of the Voting Rights Act, signed into law by President Lyndon B. Johnson on August 6, 1965.

Over the course of the twentieth century, White vigilante justice has transformed from violent protest mobs to state-sanctioned law enforcement agencies. We see this clearly in the 1992 Los Angeles Riots, which marked yet another turning point in the use of militarized police tactics to curtail protests, as those documented in the image below. 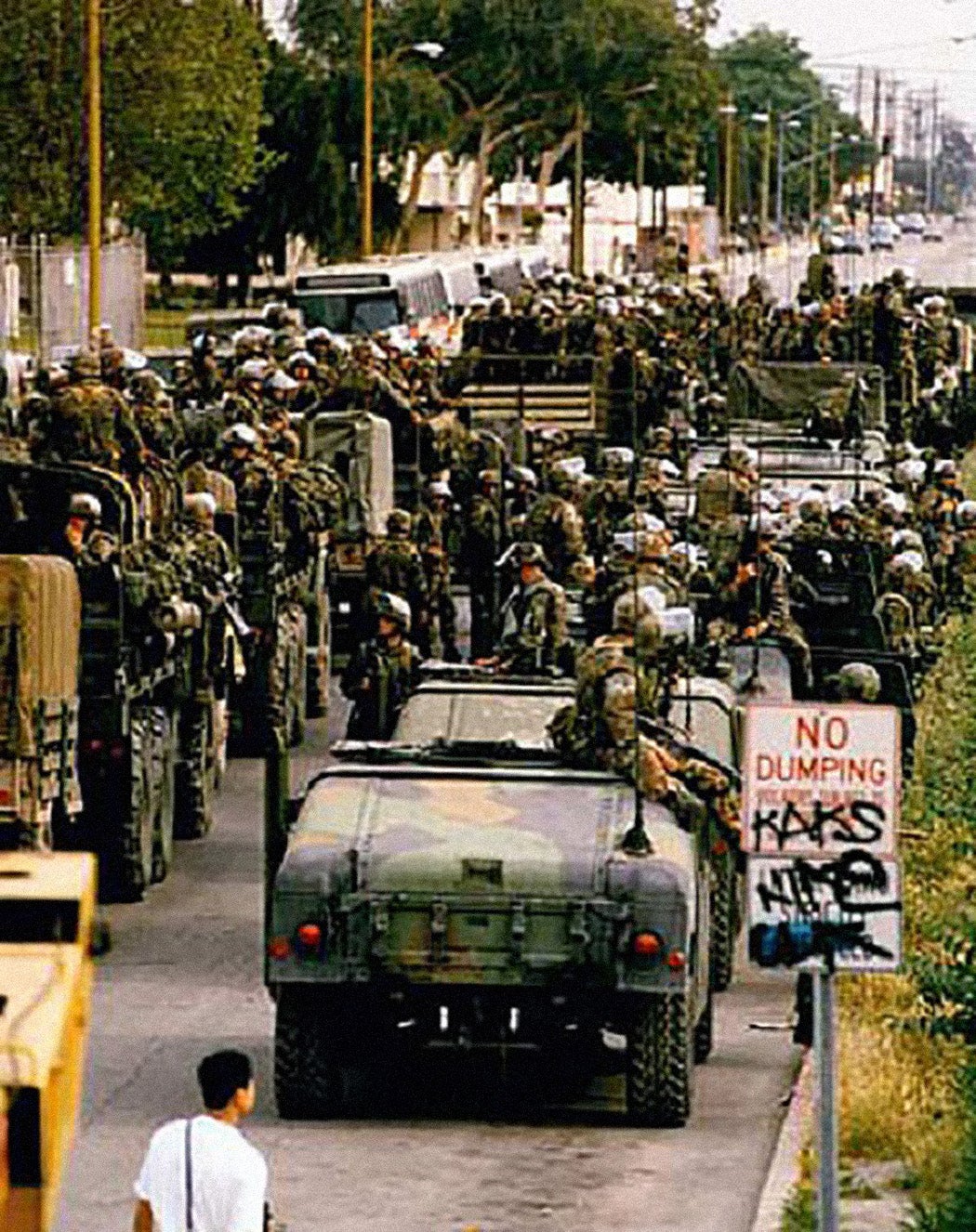 Marines disembark from their Humvees in Compton during the L.A. riots, 1992 via Wikimedia Commons

Mayor Tom Bradley declared a state of emergency and Governor Pete Wilson, a Marine Corps veteran, authorized thousands of National Guard troops, Marines, and Army soldiers to enter the city. Yet, the riots also saw, for some say the first time, the use of bystander video to capture and publicly display, to an international audience, acts of police violence. These bystander videos, like the one seen in the Tweet below by @POLITICO, complicate mainstream reporting.

From early twentieth century race riots to the 1965 “Bloody Sunday” attacks in Selma, the L.A. Riots of 1992 to the recent Black Lives Matter protests, protest images, as they appear in mainstream media, reflect a racialized power dynamic often signified by vigilante policing and militarized enforcement. But there’s more to the story. In her essay on #BlackLivesMatter post-Ferguson and Black women’s historical leadership in racial justice movements, Treva B. Lindsey defines “black violability” as a term that captures “both the lived and historical experiences of Black people with state-initiated and state-sanctioned violence.” She reminds us that what she calls the “white domestic terror lineage” extends beyond police violence, both representational (in the case of media images) and real. Black racial terror is grounded in a “Black masculine-centered narrative” that frames anti-Black violence as “pervasive injustice primarily experienced by Black men and boys.” While many know the names of Sandra Bland and Breonna Taylor, the names of women and girls – cis and trans—such as Tarika Wilson, Pearlie Golden, Rekia Boyd, Tanisha Anderson, Aiyana Stanley-Jones, Renisha McBride, Yvette Smith, Riah Milton and Dominique “Rem’mie” Fells—remain unknown to most people. Their stories and, more specifically, their fatal experiences with White police and security officers and vigilantes disrupt a masculinist framing of anti-Black state violence. The idea of “black violability” presents a way of making visible how anti-Black terror manifests for “Black women and girls and trans, genderqueer, gender non-conforming, and queer people.”

Mateo De La Torre, director of policy and advocacy of LGBTQ prisoners’ rights organization Black and Pink, notes that the hypervisibility of being Black and transgender or gender non-conforming increases the level of engagement with police and the threat of negative profiling. “What people need to understand is that when you’re talking about Black and brown communities, immigrant communities, communities experiencing poverty, and then you layer that with folks who are LGBTQ, specifically trans and gender nonconforming, (systemic policing) issues aren’t necessarily very different, they’re just amplified,” says De La Torre in an interview with Vox.

Campaigns like #SayHerName and the important research and policy work of the African American Policy Forum and the Center for Intersectionality and Social Policy Studies disrupt male-centric frames of anti-Black police violence. Lindsey advances an intersectional approach that reveals the names and experiences of Black cis and trans women to uncover the “multiple dimensions of state and state-sanctioned anti-Black violence” in ways that situate sexual violence and police murders as “interconnected forms of racial terror.”

#BlackLivesMatter Protest & the Pandemic of Racism

Alicia Garza, one of the founders of the #BlackLivesMatter movement, reminds us that radical social movements of the twenty-first century engage intersectional political organizing platforms and leadership models that center queer folks, Black cis women, transgender, and gender non-conforming individuals. They call for an end to anti-Black state violence and for cultural, political, and economic shifts that uplift the dignity of Black lives. Collective public actions produce protest images that reflect the multidimensional aspects of #BlackLivesMatter and other allied movements for structural change.

The civil unrest of 2020, sparked by the public outcry over the police murders of George Floyd, Breonna Taylor, and Tony McDade, has been fueled by the U.S. federal government’s ghastly response to the novel coronavirus pandemic which disproportionately impacted urban Black communities. The wave of municipal and state lockdowns rendered Black communities under a new kind of siege as police officers administered mandatory mask requirements and sunset curfews. Amnesty International released a report in June 2020 documenting the human rights violations in the enforcement of COVID-19 measures across Europe, which included the disproportionate targeting of “ethnic minority and marginalized groups with violence, discriminatory identity checks, forced quarantines and fines.”

Despite evidence of heightened racial and ethnic terror among marginalized racial and ethnic communities across Europe and the U.S., protest images of late offer juxtapositions to the hypermasculine representations of civil unrest that mass media have historically advanced.

In May, 2020, choreographer Kemar Jewel experienced police violence first hand at a Black Lives Matter protest in New York City. This incident prompted Jewel to produce the dance video “Vogue 4 #BlackLivesMatter,” which highlights “how Black and Brown queer and trans people can use voguing as a form of protest, and as a source of joy in this political climate.” The video features Black dancers voguing on location at the iconic Stonewall Inn and includes clips of protestors using vogue as a form of social protest.

Social media also offers visual interventions into mass media’s heteronormative presentation of protest actions. Instagram hashtags like #blmpride, #blacklgbtlivesmatter and #blacktranslivesmatter capture the hidden narratives of Black queer and trans activism within the Black Lives Matter movement. On platforms like Facebook and Twitter, activists and organizers generate their own news content through livestream videos and narrative and visual posts that offer in-depth analysis and reporting to articulate an effective message. In an age of hashtag activism and partisan news engagement, social media offers the possibilities for intersectional movements to take charge of their message and reimagine images of Black protest inclusive of the plurality of individual experiences and of Black communal life.