COLUMBUS, Ohio (WCMH) – Two months after rioters stormed the U.S. Capitol to stop the certification of Electoral College votes, a new report on the extremists involved in the siege places notable geographic significance on Franklin County.

Among the 180 counties in 40 states where the more than 250 people charged with crimes related to the riot came from, Franklin County is tied for first, according to a preliminary report by The George Washington University’s Center for Extremism.

Although only being home to four people charged (1.5%), Ohio’s most populous county is tied with Los Angeles County, California, and suburban Philadelphia’s Bucks County, Pennsylvania, for being home to the most rioters.

This map from a George Washington University Center for Extremism report in early March 2021 shows the counties of residence for the people charged in the Jan. 2 riot at the U.S. Capitol. (GWU)

On Jan. 6 after then-outgoing President Donald Trump held a rally on the National Mall continuing false claims of widespread voter fraud costing him the 2020 election, a mob broke through barricades and charged inside the Capitol to stop Congress from certifying the Electoral College result.

Five people died in the attack and more than 140 were injured.

None of the 257 people federally charged in the riot has yet been convicted, but GWU’s analysis is the first comprehensive glimpse into their backgrounds:

Their charges range from trespassing to assaulting law enforcement to conspiracy against the U.S. government. GWU’s report analyzed indictments, court records, news releases and public records requests, plus interviews with prosecutors and other law enforcement officials.

The report argues that the Capitol riot was a culmination of “remarkable growth” in “domestic extremism,” often happening online. The rioters ranged from neo-Nazis and armed militias to conspiracy theorists and QAnon followers.

Eleven people from Ohio have been charged in federal court in connection with the attack, according to GWU:

The four Franklin County residents charged in the attack are Derek Jancart of Canal Winchester, Troy Faulkner of Whitehall and Dustin Thompson (Columbus) and Robert Lyon (Reynoldsburg). The Delaware County resident is Alexander Sheppard of Powell.

Although Franklin County is ranked high as a home of those charged, Ohio as a state is not. Ohio is one of six states with 10-18 residents charged, and another four states are home to 19-27 people charged. 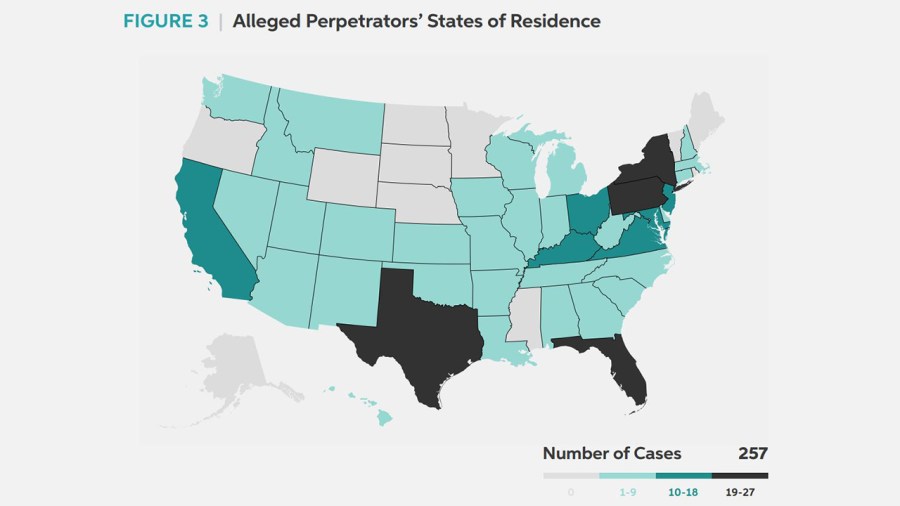 This map from a George Washington University Center for Extremism report in early March 2021 shows the states of residence for the people charged in the Jan. 2 riot at the U.S. Capitol. (GWU)

Among the “militant networks” the report highlights is the Ohio State Regular Militia, which the FBI claims is a “dues-paying subset” of the Oath Keepers. It also highlights members Jessica Watkins and Donovan Crowl, both ex-military and from Champaign County.

“The FBI claims that Oath Keepers planned for the events of January 6th as early as November 9, 2020, when Watkins reportedly encouraged all Ohio State Regular Militia under her command to attend military training so they could be “fighting fit before innaugeration (sic),” the report states.

Federal prosecutors argue that Watkins and others “(organized) a tactical unit of trained fighters that stormed and breached the Capitol,” including members of the Ohio State Regular Militia, the Florida Oath Keepers and other chapters, according to the report.

“Based on this report’s findings,” the authors wrote, “we recommend that the U.S. government improve access to data on domestic terrorism investigations, conduct a systematic review of intelligence gathering and policy response to domestic terrorism alerts, and use existing structures to improve information-sharing between the federal agencies tasked with combating domestic violent extremism.”

Messaging errors within the wake of the Derek Chauvin verdict

DeWine indicators ‘stand your floor’ invoice into regulation — with reservations

Be a part of Expertise Retail™: a Webcast Hosted by Washington...